HE IS MAKING THESE PEOPLE LITERATE

IN THE WORD OF GOD 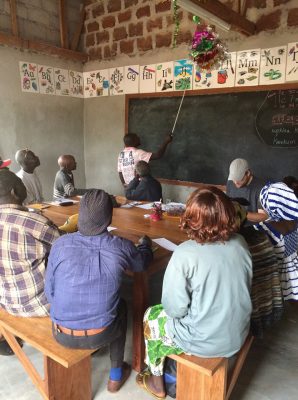 Dave and Stacey Hare, 2018 graduates of Dallas International and linguists among the Kwakum of Cameroon, Africa, met a former New Tribes worker years ago and sensed the calling to serve cross-culturally as a result. They later joined World Team and began their studies in Applied Linguistics at Dallas International University, where they benefited greatly from courses such as Second Language and Culture Acquisition, Tone Analysis, Theory and Practice of Translation, and Principles of Literacy. Stacey points out that the literacy course was especially helpful to them when they began designing a literacy program on the field.

Now, Dave and Stacey, along with their four children, have their hands in all sorts of projects in Cameroon, including linguistic analysis, literacy, Bible translation, and church planting. Stacey conducts Bible studies with local women, and the couple plans to begin Oral Bible Storying this summer and an initial written Bible translation project next year. 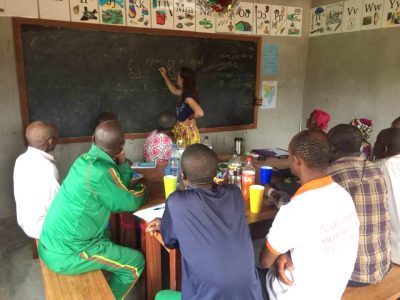 Stacey praises God for the ways He has helped her again and again in linguistic analysis and language-learning and gives thanks for the ways He is also moving in the community where her family serves. “He is making this people, the Kwakum, literate in the Word of God,” she says. She looks back to her time at Dallas International with gratitude, saying that the work ethic and commitment of the professors left an impression on her that she will never forget. She remarks, “They call us to excellence, and they make sacrifices to get us there.”

As the Hares continue their language and literacy programs, they would appreciate your prayers for their Oral Bible Storying and transitional literacy initiatives over the next six months. You can also pray for the written Bible translation project and for continued literacy as a result. Finally, Stacey asks for specific prayer for the Lord to bring a close friend of hers, Mami, to a relationship with Christ.

FROM BERMUDA TO DALLAS TO LONDON 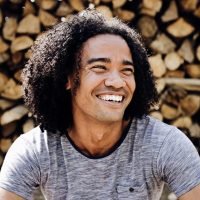 When Joshua came to Dallas International University several years ago to study World Arts, he had no idea what awaited him. Joshua, a former pastor from Bermuda, began volunteering with a refugee welcome team at a local organization during his studies at Dallas International. One thing led to another, and Joshua eventually stepped into a role as a refugee acculturation specialist and then later as a consultant for refugee support programs.

Because of his background in pastoral ministry, paired with his prior travels and the cross-cultural training he received at Dallas International, Joshua was well equipped to serve the Dallas refugee community. Now, after over four years in Dallas, Joshua is taking the next step and moving to London to begin a master’s program in human migration studies.

Joshua would love for people to pray for wisdom for him in his studies and for God to direct his next steps in ministry among refugees.

Dallas International University is pleased to announce that we have received $13,770 for the matching campaign to endow the Eduard Alekseyev Scholarship for World Arts!

This scholarship supports the education of World Arts students, and we are excited to invite you to be a part of empowering more World Arts students to pursue excellent work in their fields and contribute to communities worldwide. Generous donors have pledged $30,000 to match all designated gifts through the end of September, so there is still time for your gift to be matched!

For more information about the scholarship and how to participate, go to www.diu.edu/ArtsEndowment.

We are excited to be celebrating our twentieth anniversary this year! With this milestone come many changes as we make room for more students, more programs, and a greater worldwide impact. Here are just a few of the exciting developments coming soon:

We so appreciate your prayers with and for us as we make these changes and grow as a school. Greater things are still to come!