to Have a Lasting, Global Impact for Generations to Come

Dallas International University is excited to announce a matching campaign to endow the Eduard Alekseyev Scholarship for World Arts. Named after Dr. Eduard Alekseyev, mentor to Dr. Robin Harris of the Center for Excellence in World Arts (CEWA), this scholarship supports the education of World Arts students who have demonstrated through their field work that they possess outstanding potential for a future as an Arts Specialist.

Generous donors have pledged $30,000 to match all designated gifts through the end of September. $25,000 is needed to establish an endowment, which is considered fully funded when it reaches the $1.5 million level. Once established, the investment income of an endowed scholarship begins providing funds to assist students in paying for their studies.

Your gifts toward this scholarship will enable us to endow the fund and thus continue to empower more World Arts students to pursue excellent work in their fields. Recipients of this scholarship will work cross-culturally alongside singers, musicians, actors, dancers, storytellers, and visual artists, researching the arts of their community and sparking artistic creations that respond to community needs. This kind of community development through the arts can have a great impact for health education, justice issues, language and arts preservation, literacy, scripture engagement and translation, worship expressions, and other needs expressed by the community. For more info go to www.diu.edu/ArtsEndowment.

We invite you to consider how your gift toward this endowment could empower not only our students but also the communities they will serve. Your gift, matched by another’s, could have a lasting, global impact for generations to come.

Many thanks to First Free Will Baptist Church of Duncanville, Texas for their generous gift of $10,000 toward the endowment of the Alekseyev Scholarship in our matching campaign. 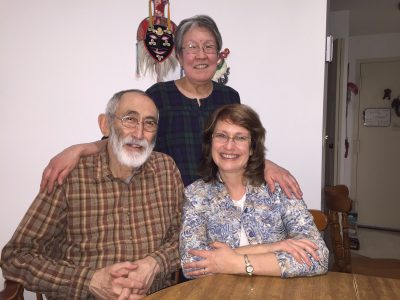 The Alekseyevs – Eduard and Zoya – with Robin Harris

Dr. Eduard Alekseyev (b. 1937) received his Ph.D. and Doctor of Science degrees in ethnomusicology from the All Union Institute of Art Studies in Moscow. For forty years, he conducted intensive musical fieldwork in various republics of the former Soviet Union, becoming particularly known for his expertise in the musical cultures of Siberia.

Dr. Alekseyev emigrated from Russia in 1997 and currently lives in Massachusetts. He has a rich connection with Dr. Robin Harris, professor and director of the Center for Excellence in World Arts at Dallas International University. For the last decade, their collaborative projects have deepened Dallas International’s connections with a global community of scholars.

Dr. Harris writes: Professor Alekseyev’s mentoring has deeply impacted my life. Working with him on various aspects of my dissertation and book projects greatly enriched my understanding of the Soviet historical context, of Sakha music, and the epic song and storytelling genre of Olonkho in particular.

Most importantly, I have appreciated the values that we share. He has inspired me with his humility, scholarly inquisitiveness, and loyalty, profoundly demonstrated by his dedication to “giving back” to both his field collaborators and his many students. He has modeled a generous, kind, and unpretentious life of scholarship.

It is my privilege to share this endowment campaign for the benefit of Dallas International University World Arts students who have demonstrated, through a period of fieldwork, outstanding potential for a future as an arts specialist. It is my hope that this endowed scholarship will encourage recipients to follow in the footsteps of my mentor, Dr. Eduard Alekseyev, achieving excellence both in the classroom and on the field. 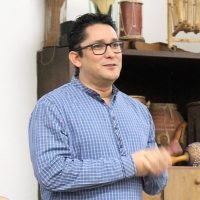 Juan Arvelo is a recent recipient of the Alekseyev Scholarship for World Arts and lives with his wife, Ainara, and their two children in northern Spain. Juan, a Venezuelan by birth, and Ainara, a native Basque, work among the Basque people, leading an initiative called Arts Release, which focuses on promoting the use of arts while engaging with the community.

Juan is also a synchronous learning student in the World Arts program here at Dallas International. He received the Alekseyev Scholarship while taking our Applied Arts course, which focuses on encouraging sustainability and integrating these expressions into local community life by designing interactive, dialogue-based learning activities for arts-discovery and arts-creation workshops; mentoring local artists; promoting the dissemination of indigenous works; and encouraging the positive self-identity that these forms may engender.

Thanks to the scholarship, Juan has been able to use what he learned to encourage local artists to use their local art forms to express themselves through Arts Release.