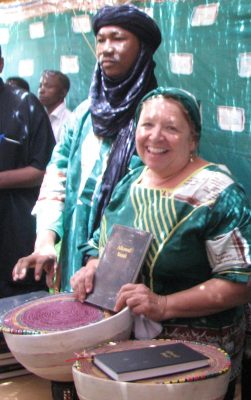 Jean with a national co-translator at NT dedication

God used a Navigators college ministry to draw Jean to Christ while she was studying at the University of Delaware. Later, while attending a Navigators summer training program, Jean heard about cross-cultural service for the first time. A year later, during a six-week trip to Benin, God confirmed to Jean that he was leading her in this direction. After working seven years as a nurse in a hospital in Niger, Jean returned to the States early for her second furlough, suffering burnout and chronic fatigue. Not long afterward, she attended Urbana, where she picked up information on Wycliffe and decided to pursue her interest in Bible translation. She went on to receive linguistics and translation training from SIL in Oregon, the University of Texas at Arlington (M.A. in Linguistics), and Dallas International University.

“Although I struggled a little with Phonology my first semester, I ended up writing my thesis on a phonological process of consonant alternation that occurs in the language I am translating,” Jean shared about her time at Dallas Int’l. “I also made a number of good friends, now mostly working in other parts of the world, who I have continued to keep up with over the years.” Jean was also greatly encouraged to have several prayer partners throughout her time at Dallas Int’l and enjoyed working at the campus health center.

Now, Jean serves in Niger Republic as a Bible translator and exegete for SIM. She is the team leader, working on the Old Testament translation in the Fulfulde language along with two full-time and one part-time national translators and offering some IT support for the process as well. In September 2016, they finished and dedicated the New Testament translation.

Let’s ask the Lord to give Jean, her co-translators, and their families good health as they conduct this life-transforming work. Also, pray for the Smoker family, who joined Jean in early December 2018 and have begun learning the Fulfulde language and culture.

For almost 50 years, there has been a school for translators on the International Linguistic Campus here in Dallas. Originally it was called TexasSIL and offered an accredited M.A. through the University of Texas Arlington. In the late ’90’s, a new administration at UT Arlington decided they did not want to be linked with the faith-based program at TexasSIL. So, in 1999, the Graduate Institute of Applied Linguistics (now Dallas International University) was launched. We received accreditation in 2004.

For over 60 years, there has been a similar arrangement between SIL and the University of North Dakota (UND) allowing SIL to run a summer program for translators. It is known as SIL-UND. Unfortunately, history has repeated itself and the relationship between SIL and UND is ending after this summer. After much consultation with the other translation schools (including Dallas Int’l), and SIL leadership, the decision has been made to discontinue the SIL-UND program completely.

In light of this decision and with the encouragement of the SIL-UND leadership and Danny Foster (president of Canada Institute of Linguistics), Dallas Int’l has committed to maintaining the legacy of SIL-UND. We plan to begin offering a full summer program in 2020.

We have just begun planning, so there are few details to share with you at this time. However, we are committed to continuing the strengths of the SIL-UND program. These strengths include:
• The ability to earn an M.A. over a period of years through summer classes
• A commitment to community. At SIL-UND, everyone, including faculty and student families, lived in the dorm together. We hope to continue this pattern.
• Cooperative programs with other schools to offer their students a linguistic minor through summer courses. We already have several cooperative relationships where we encourage students to come to Dallas Int’l for a term to study linguistics. These courses are then transferred back to the student’s home school. We liken this to a study abroad program except it takes place in Texas. Parents tend to like this idea. We will be working with SIL-UND’s cooperating schools to continue and expand this program.

Please pray with us that the program this summer at SIL-UND will end well with a positive witness to the UND administration. And pray for us as we undertake this huge task of starting a summer program.

Tuition at Dallas Int’l covers one-third of operating expenses. Most schools depend on endowments and gifts from their alumni to cover the rest. Most of our alumni serve cross-culturally and are not able to meet the need. So, we depend on gifts from those who understand the importance of preparing people for service in Bible translation and related fields. We have many donors who give $25, $50, or more monthly. They are the core of our giving base. Others, as God leads, bless us with larger gifts. Regardless of the amount or frequency, we are grateful. Would you pray about becoming a regular giving partner, or increasing the amount you already give? Our school is growing, and the financial need grows with it. Thank you!