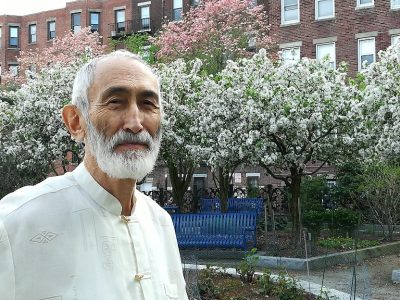 On March 10, 2021, Dallas International University lost a beloved mentor when ethnomusicologist and folklorist Dr. Eduard Alekseyev (b. December 4, 1937) suffered a stroke and passed away.

Born into a family of “Honored Teachers of the USSR” in Yakutia (now the Republic of Sakha in the Russian Federation), he graduated with honors from the Moscow State Conservatory and then studied ethnomusicology at the Institute of Art History of the USSR Academy of Sciences. His four decades of music and folklore expeditions extended far beyond his native Yakutia to many republics of the former Soviet Union—though he was particularly known for his vast knowledge of Siberian music cultures. He leaves a legacy of prolific scholarship (over 100 publications) that stretches over six decades.

In 2017 the Center for Excellence in World Arts at Dallas International University celebrated Dr. Alekseyev’s achievements and mentoring by establishing an endowed scholarship in his name. Dr. Robin Harris writes:

In addition to many years of mentoring me in my studies of Siberian music and arts, Dr. Alekseyev was always eager to support the next generation of scholars, including some of our own students in the World Arts program. He will be deeply missed by the many people who were privileged to know him, who will remember him as an infallibly kind, generous man with a powerful intellect and an indomitable work ethic: a great soul. His passing leaves a hole in our lives. We are so grateful that his love for the Lord means that we will see him again.