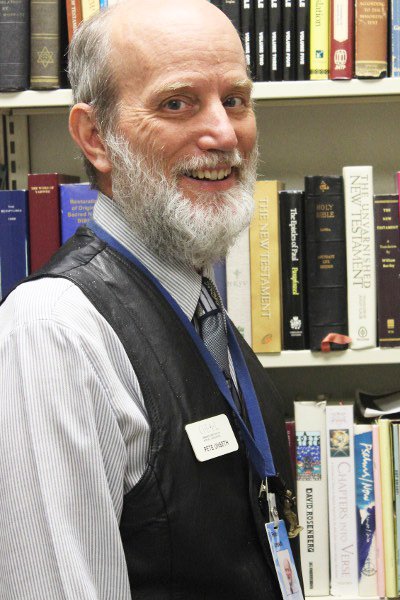 As faculty, Pete loves helping his students grasp and apply new concepts. Having gained field experience in diverse disciplines, he has taught classes on a variety of subjects including literacy, oral tradition and literature, and language survey. Pete loves investing in his students, devoting his time to them both in and outside of class. He especially enjoys watching them grow academically and spiritually. Undoubtedly, Pete’s dedication reveals his passion for his work and his students.

Through assorted experiences, God clearly prepared Pete for his position as Dallas International faculty. Dependent on Scripture and undaunted by physical hardship, Pete knew when he was in high school that God was leading him into cross-cultural service. Following his undergraduate studies at Moody Bible Institute and St. Paul Bible College, he completed his Master’s degree in Linguistics at the University of North Dakota. Although initially anticipating serving in Southeast Asia, Pete ultimately accepted an assignment in Ethiopia. In the capital, Pete taught part-time at Addis Ababa University while spending the remainder of his time researching Nilo-Saharan languages. Additionally, he completed survey trips during this teaching assignment. Later, in one of the locations he had surveyed, Pete spent two and a half years conducting translation work and literacy classes in cooperation with the Mekane Yesus Church. Health challenges then prompted his return first to the capital and eventually to the States. After a year of attending to his health needs, Pete began teaching at Dallas International and completed his Doctorate in Linguistics at the University of Texas at Arlington. Drawing from the variety of experiences God has provided him, Pete continues to faithfully and passionately serve the students at Dallas International University.

Among Pete’s favorite foods are tibs (an Ethiopian dish) and his wife’s lasagna.

Pete does not have a bucket list. He reflects, “Life is more fun day by day.”

His favorite place is where he served with the Majang people in Ethiopia.

Pete loves studying proverbs from around the world. He also enjoys studying and working with different writing systems.

When asked what advice he would like to share, Pete said, “Love the Lord your God with all your heart, soul, mind, and strength. And don’t neglect the mind part of that. And also love your neighbor as yourself. If Jesus put those two together, I can too.”

Pete is a Fellow of the Pike Center for Integrative Scholarship.

University of Texas at Arlington

I spend a lot of happy time studying proverbs from around the world, and thinking about how to use them in ways that benefit the communities that use them, e.g. promoting public health, education, nation building, building positive values in young (and not so young) people.

I am intrigued by how communities choose scripts and spelling systems, sometimes even creating their own script.

I am fascinated by the study of the history of Bible translation. There have been some fascinating people involved in Bible translation over the years–everyone from godly pioneers from the far past, to Napoleon’s nephew, to a slave that was rescued by the Italian navy.
I have become fascinated by Wikipedia. I have created or edited a number of articles related to my interests–a dangerous, but fascinating, hobby.
My wife Carole (queen of Dallas Int’l interlibrary loan) and I enjoy hosting students in our home, such as a weekly Bible study and an Ethiopian feast every semester.

So many of my interests revolve around (what I think of as) sociolinguistic themes.

Proverbs
I have taught an independent study course on proverbs and also supervised a thesis on the study of proverbs in a language community. How can we use a community’s proverbs in positive forms of language-based development? I have more ideas for proverb research than time. I have written book reviews.

Creation and Choice of Scripts
A community’s choice of script or creations of a new script involves powerful sociolinguistic factors.

Bible Translation
Sociolinguistics has much to contribute to Bible translation. For example, I have given two conference papers on the puzzling practice of not using polite forms in Bible translation. So many choices in translation need to be governed by local viewpoints.

Ethiopia
I still try to understand Ethiopia, topics related to her languages and ethnic groups, especially as related to reading and writing in groups that are now developing literature for the first time.

Sociolinguistics
Sociolinguistics is a very broad field. I am interested in such topics as language shift (especially when it results in language endangerment), writing creole languages, and linguistic landscape.

I have chaired MA theses on the following topics:

AA5333 Principles of Literacy
AA5361 Principles of Language Survey
AA5353 Language Development and Planning
AA5357 Oral Tradition and Literature
In addition, I have had students in a variety of independent study courses: got an idea for one?

Topical list of publications
My academic activities have included a number of areas: Sociolinguistics of scripts, Proverbs, Ethiopia and Ethiopian languages, Translation, Literacy. Many of my publications are listed below under these categories. The categories are not always mutually exclusive.

2008. Edited International Journal of the Sociology of Language, Issue 192, on the topic “Sociolinguistics of script choice.”

2008. The sociolinguistics of script choice: an introduction. International Journal of the Sociology of Language 192: 1-4.

2012. Edited with M. Lynn Landweer International Journal of the Sociology of Language, Issue 214 on the theme “Language use in Melanesia”.

2012. with M. Lynn Landweer. An introduction to language use in Melanesia. International Journal of the Sociology of Language 214:1-3.

2008. Edited International Journal of the Sociology of Language, Issue 192, on the topic “Sociolinguistics of script choice.”

2003. Review of Language in South Africa: The Role of Language in National Transformation, Reconstruction and Development, by Vic Webb, http://www.linguistlist.org/issues/14/14-452.html#1

2011 Review of Taddese Jaleta Jirata, A Contextual Study of Guji-Oromo Proverbs (2009) and Abdullahi A. Shongolo and Günther Schlee, Boran Proverbs in Their Cultural Context (2007). Proverbium 28: 427-434.

2011. Review of Taddese Jaleta Jirata, A Contextual Study of Guji-Oromo Proverbs (2009) and Abdullahi A. Shongolo and Günther Schlee, Boran Proverbs in Their Cultural Context (2007). Proverbium 28: 427-434

2002. Biconsonantal reduplication in Amharic and Ethio-Semitic. Dissertation, University of Texas at Arlington.

1997. Fitting in with Local Assumptions about Literacy: Some Ethiopian Experiences. Notes on Literacy 23.2:1-14.

1997. An Archaic Surmic Causative Prefix. Occasional Papers in the Study of Sudanese Languages 7:41-48.

1989. An Initial Comparison and Reconstruction of Case Suffixes in Surmic Languages. Journal of Ethiopian Studies 22:97-104.