WHEN THE WORLD COMES TO US

79.5 million people. That’s what the UN Refugee Agency reports as the number of forcibly displaced people worldwide. Approximately 26 million of that 79.5 million are classified as refugees, those who have fled their home countries because of war or persecution. Often, we cannot even show their faces in photos because of the same fear that caused them to flee their homes. They leave behind entire lives—land, careers, family, and belongings—and have to start over in new countries, learning new languages and new cultural customs. In some ways, our graduates experience similar things as they finish their training, say goodbye to loved ones, and move to new places with new languages and new cultural customs. The difference, however, is that for refugees, there may not be a chance to return home.

DIU has spent 20 years preparing graduates to go out into the world, and that has not changed. But now, with Dallas being the second-largest refugee resettling city in the United States, the world has clearly come to us. Over 50 languages are spoken by refugees living in just one small area of North Dallas, and some of these languages have not yet been thoroughly 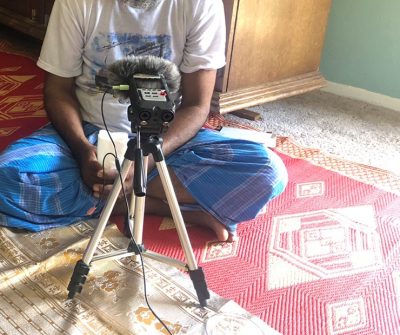 analyzed or documented. They face a host of challenges due to a lack of mother-tongue literacy, but they also bring with them beautiful cultures and languages. So this fall, DIU has partnered with a local agency serving refugees to be part of the solution and learn from our refugee neighbors. One of our students and her husband, an alumnus of DIU and intern with the partner organization, will be working with our Second Language and Culture Acquisition course to facilitate distance learning with a female native speaker of one of those languages, right here in the Metroplex.

The best part about it? This will be the first time in her 55 years of life that our language consultant has had the opportunity to have a job.

Students in this course will not only have the opportunity to learn about a new language and culture found in our Dallas backyard, but they will also have the chance to participate in real field-work, analyzing and documenting a language that needs preservation. Because you give to DIU, we can be part of this groundbreaking work and empower a refugee woman with her first job for a better life in America. It’s a ripple effect, and it’s one we couldn’t have without partners like you.

We can’t wait to report back in a few months to show you more of the impact you are making on this new endeavor through giving to DIU. In the meantime, please pray for us as we venture out into something new. Thank you!

Victor Bashon Jackson I, better known to us as “Pastor Vic”, brought the excitement of his culture to our school, along with his love of God’s people and a servant’s heart. We all knew that he loved, us and “there was nothing we could do about it.”

Before coming to DIU, where he faithfully served as chaplain from 2011 to 2018, Pastor Vic had a variety of experiences. After college, he played professional football for the Houston Oilers (now the Tennessee Titans) and for the Saskatchewan Roughriders in Canada. Following this, Vic then managed an operational division in the banking industry. Later, he was instrumental in helping to plant a church and successfully started and ran his own moving company.

In 2003, Pastor Vic became the Pastor of Evangelism (Reach Out) at Dallas First Church and was recognized as the first ordained African American in the Nazarene denomination. He currently serves as the pastor of Building the Kingdom Community Church, a Church of the Nazarene in Cedar Hill. He and his wife, Ramona, have four adult children and a growing number of grandchildren. Pastor Vic has a vision to see people of all backgrounds involved in the work of sharing God’s word with others, and we want to do our part to help make that vision a reality.

The “Victor Bashon Jackson I Scholarship” will be awarded to two African-American students residing in Southwest Dallas County enrolled in the BA(IS) program for undergraduates at Dallas International University for Fall 2021 and beyond. Each scholarship will cover all tuition costs for the completion of a bachelor’s degree. Dallas International University will match funds raised through this scholarship to help your gifts make an even greater impact.

To fund these scholarships, DIU is seeking twelve individuals willing to commit to giving $500 each term for the duration of a student’s program, up to four years ($4,000 in total). Other gifts will be gratefully received to help cover increases in tuition or funding shortfalls. To date, we have raised just over $5,000. Will you join us in prayer for the remainder of these scholarships to be funded?

There is a new kid on the block in our Development Department! You may have noticed that we recently added a new online giving platform called Kindest. It’s easy to use and mobile-friendly, which we all love! All you have to do is visit diu.edu/give and click “Give Online” to give to our General Fund or select a project option from the drop-down menus found on the page. Then follow the simple directions on the Kindest page to complete the process.

You can also still give by phone or by check if you prefer. Checks can be made payable to Dallas International University and note the project designation in a memo. If you currently have a recurring payment set up through PaySimple, there is no need to make any changes, unless you want to do so.

If you have questions or need a hand with Kindest, please let us know! We’re here to help. Please email us at development@diu.edu or give us a call at 972.708.7552.